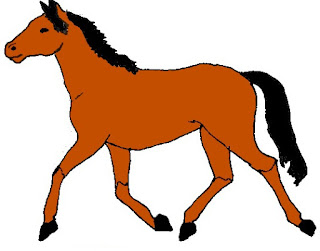 Like a camel and elephant, a horse is also a quadruped animal. The muscles of a horse are very strong, so it is a powerful animal. The horse is considered to be an expert in running and is also used for riding. In the olden times, the horse was a special part of the army of the then King Maharajas. Horses were used in fighting, in addition, the king also rode on horseback to hunt in the forests. This animal has an important place in the culture of India.
Few Sentences about Horse - 2
5 sentences about horse - 3
Marwari Horses - These horses were used to fight de in the old times, so it is often said that the blood of royal family runs in the body of horses of these breeds.
Horses of this breed are found especially in the Marwar region of Rajasthan.
Because this is also their original place. Marwadi horses range in length from 135 to 140 cm and height from 150 to 160 cm.
Horses of which breed are mostly used in the Raja Maharajas and sports competitions in the army.
The cost of a Marwari horse is very high. A horse is worth more than several lakhs.
Marwari horse is considered to be the most special breed horse in India.
Kathiawadi Horses - Which breed of horses are found in Gujarat, they are very good breed horses. Amreli of Gujarat are found in Junagadh and Rajkot districts. The horse is brown in color and its neck is longer than 145 cm in height. Is also more.
Kachchi Sindhi Horses - Horses of this breed are much more expensive, they cost between 300000 to 10 lakh Jai horses are also very good at running.
Horses easily adapt themselves in every season.
They have the ability to withstand heat.
The Kutchi Sindhi horse breed has been recognized in India as the 7th species.
The raw Sindhi horse breed is quite different from the breed of Marwari and Kathiawadi horses.
Horse is a horse of desert areas because it has the ability to mold itself in the areas of the desert, its body is made of itself, which can keep itself alive even in the hottest areas of this breed in India. The horse is also called a wild horse.
Spiti horse - Horses of this breed are usually found in the hilly areas of Himachal Pradesh. Most of the height of this horse is up to 128 cm. Horses of which breed are considered to be the most special and finest in mountainous areas.
Manipuri Pony Horse - Horse of this breed is found in many building buildings colors. It is considered to be a very good horse because Jai is very agile and powerful and it is mostly used for fighting in ancient times and for sports in today's time. Is also done. This horse is also very fast to run.
Bhotia breed - Horses of this breed are mostly found in Darjeeling. Horses are quite adept at running and carrying goods, so they are mostly used mainly for these purposes.
The horse has been a good friend of man since ancient times. Ghoda is a beautiful and loyal animal. The horse is a domesticated and fast-paced animal. Through the medium of this post, we will give some interesting and interesting information about horses, which will never have heard its facts before.
Few points on horse for children