"You give me blood, I'll give you freedom." Netaji Subhash Chandra Bose was the great son of Bharat Mata who made such roar.

He was one of those great personalities who tried to overcome the sufferings of Bharatmata by sacrificing her happy life.

Netaji Subhash Chandra Bose was born on 23 January 1897 in a city called Cuttack in the state of Orissa. He was educated in a Western school in Cuttack.

After passing the matriculation examination from the University of Calcutta, studying in the Scottish Church College, BA from there. Honors degree obtained.

They were ICS in 1919 AD. Went to England to pass the examination of Returning from there, officers were appointed in a government job. Later, he quit his job and took a fast on the service of the country and joined the Seva Dal under the influence of Babu Chittaranjan Das, the famous patriot of Bengal.
When they started organizing volunteers for independence in 1921, the British government caught them and jailed them.

Though Subhash's views were not found with Gandhiji, he respected Gandhi and continued to work with him.

He led the 'Break Salt Law Movement' movement in 1930 AD. He was elected president of the Congress in 1938 and 1939 AD. Netaji later resigned from the Congress due to differences in views and established the Forward Block, which aimed at complete Swarajya and Hindu-Muslim unity.

In 1940 AD, the British government made him a prisoner but due to being unwell soon, he was taken out of jail and put under house arrest and kept vigilously guarded all around.

One day Subhash Babu changed his disguise and betrayed the British government and got set to freeze by way of Kabul. Then came to Tokyo (Japan) from Germany in 1942.

Staying there, he organized 'Azad Hind Fauj' to make India independent. He fought the English army even when the resources were scarce. They fought fiercely in Imphal.

In which he rescued the sixes of the British Empire and drove the British to Bama and Malaya. But later in the German-Japan war of 1945, they had to give up arms to the 'Azad Hind Fauj'.

But it did not happen to the people. As a result, his death remains a mystery even today.

Today the slogan of 'Hind' and the song 'Kadam-Kadam Badhe Jae' are in our ears. There was a charm in magic and personality in his speech. 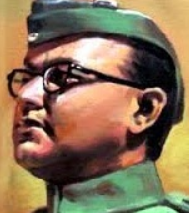