Short essay on Mahatma Gandhi for students and children

Short essay on Mahatma Gandhi for students and children

Mahatma Gandhi, the Father of the Nation, the father of India, the creator of the new nation, and the fortune-teller, Mahatma Gandhi, was one of the darkest people about whom the playwright Bernard Shaw had rightly said that "generations to come will hardly believe that such a person in the world will ever Must have happened. " He was a priest of truth, non-violence and humanity. He was one of the great men who created history.

Mahatma Gandhi's full name was Mohandas Karmachand Gandhi. He was born on October 2, 1869, in a place called Porbandar in Gujarat-Kathiawar province. His father was the Diwan of the princely state of Rajkot. His mother Putlibai was a straightforward woman of religious views. He got his primary education in Porbandar and Rajkot. He passed matriculation examination at the age of 18 years and went to England to study baristry. He was married to Kasturba at the age of thirteen. When he returned home as a barrister, his mother's affection was lifted from his head.
Incidentally, while advocating, Gandhi had to go to South Africa to settle a Gujarati businessman's case. Going there, he saw the mistreatment of Indians by whites. Whites also mistreated him there. He fearlessly opposed these atrocities of the whites. For which he also had to go to jail. In the end, he got success in it.
Returning to India from South Africa in 1915, he participated in many programs for independence. He opposed the British rollout act. The rich nation supported him. He took the path of truth and non-violence to achieve freedom. He also went to jail several times. He also performed Satyagraha. Nil Satyagraha of Bihar, Dandi Yatra or Salt Satyagraha and Khetra's Kisan Satyagraha are the main satyagrahas in Gandhi's life. Gandhiji urged Indians to adopt Swadeshi. He started the 'Quit India Movement' in 1942. On August 15, 1947, Gandhiji wanted to see India as a Ram-Rajya, with the untiring efforts of Gandhiji.
Gandhiji did not believe in Untouchability. His whole life, fighting for the untouched village village, women's education and Hindu-Muslim unity, on 30 January 1948, while going to a prayer meeting in Delhi, a killer Nathuram Godse opened fire on Gandhiji. He gave up his life there. Gandhi ji is immortal even after death. 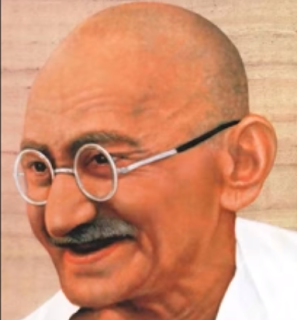