Short essay on Rainy Season for students and children

The arrival of the rainy season, according to the native months, occurs in the monsoon at the time when the summer season strikes all around and all the birds start demanding rain from God. The heat of summer scorches the nature of the entire earth. Then, to eradicate the thirst and heat of the earth, nature and the living world, a sudden east wind informs the arrival of the clouds, that is, the rain starts.

The rainy season is considered from Ashadh month to Ashwin month, due to which it is also called 'Chumash'. When the rainstorm arrives, there are black and black clouds in the sky, cool air starts flowing, lightning starts shining, then clouds start dripping. Water becomes water everywhere. Small rivers and rivulets run amok. Dadur's tur-tur, the chimes of the beetles and the glow of fireflies blossom at night. Peacocks start dancing in the forests and orchards.
The arrival of rain is no less important than a pleasant boon for Indian farmers.

India is an agricultural country, so rainfall has special importance here. Greenery envelops the fields due to rain. The fields of paddy, jowar, millet and maize give new life to the farmers. Farmers run plows in their fields only when the rains begin.

The festival of Teej is the famous festival of women in the pleasant season of the monsoon season. On the arrival of this festival, big trees are planted in the gardens. The women welcome the Sawan month by swinging on these jhalas and singing Malhar and songs. In this season, mangoes, the king of fruits, come out. Little children are seen splashing about in the rainwater and moving around.
In this season, on the one hand, a wave of joy is seen in everyone's heart, on the other hand, we also have to face sorrows. A lot of mosquitoes are seen all around, which leads to ruin of life. But this
Vandai is due to donate living life and to extinguish the heat. Whatever it is said about it, it is rightly said that if it is the king of the seasons then Varsha is the queen of the seasons. 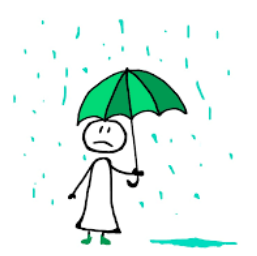